7 Surprising Facts about Cats and Referrals

Even the most hardcore ‘dog people’ can’t help but appreciate the majestic nature of the feline. Proud, elegant, …and sometimes lackadaisical, cats are filled to the brim with personality. A couple of years ago we decided to rescue a 3-year-old calico shorthair from the local shelter (supposedly calicos are almost always female). We named her Nova, and let me tell you, she is a sweetheart. She spends most of her days either exploring the office or nudging unsuspecting feet under our desks. Her magnetic character was also the inspiration for this blog post. True to their behavior, cats have traits that are less known to most. Similarly, when it comes to referrals, there are aspects even the savviest businesses may overlook.

They purr for different reasons.

It is commonly thought that a cat’s purr is an expression of happiness and content. Although this is often the case, cats usually purr during more stressful times. For example, they purr when nervous, while healing from injury, or confused. Similar to a cat’s purr, referrals are mostly made for reasons other than what is commonly thought. It is widely believed, even in dedicated literature, that referrals are made solely as a result of great service. The truth is, people make referrals for many different reasons, such as social proof, to help others, recognition, reciprocity, etc. Therefore, it’s important for a referral strategy to speak to the actual reasons why people recommend rather than assuming it is a byproduct of great service.

At this very moment, Nova is literally snoring while sprawled upside down in her kitty bed. I didn’t even know cats could snore. Nonetheless, I wouldn’t have guessed that felines spend nearly 70% of their life snoozing. Like their kitty-counterparts, even the best referral sources are usually not active. This is one reason that directly asking for referrals is ineffective – it only targets people at one specific time. Chances are they will be ‘asleep’ and not have any fitting candidates. To overcome this hurdle is to initiate a broad and consistent referral strategy that inspires promoters to refer over the long-term.

So, everybody knows that. But did you know that this expression has some truth to it? Obviously cats cannot resurrect themselves, but they can extricate themselves from many situations that might have killed a less sinewy creature. So this folklore came about from this observation. Referrals also have 9 lives. Why? Because, if cultivated properly, they can survive for a very long time. Clients that have already referred you once are 20 times more likely to refer you than your average Joe. Divide that by 2 and allow for a margin of error and you get 9. Get it? The math isn’t important. Bottom line, businesses need to identify their referral sources and inspire them to keep referring. Thanking them personally is a great start.

They spend up to 50 percent of their waking hours grooming themselves.

There are several reasons why they are constantly licking and nibbling at themselves. Everything from preventing detection, to cooling down, to self-relaxation. I can’t imagine bathing for hours upon hours. My fingers would perpetually feel like prunes. As a company you should spend a great deal of your time grooming your client base – identifying clients that are likely to refer, closing the loop on detractors, and keeping track of your progress. The organization and consistently that goes into a referral strategy is a vital element of success.

They really are copycats.

Do you know that hissing sound cats make when they are seeing red? Many feline experts think this behavior originated by imitating snakes. A snake’s distinctive noise is enough to make pretty much anything with a heartbeat take notice. People are copycats too. We especially like to copy our friends and family, because we care about their beliefs, and they are similar to us. This is known as social proof, and research has shown that it is a very strong influencer of human behavior. This is validation that businesses should focus on getting more referrals rather than cold prospects. As there is a direct link to your business via a friend or family, referrals yield a much higher conversion rate.

Cats lack the ability to taste sweetness, unlike every other mammal examined to date. They simply don’t have those type of taste buds. So that’s why they turn up their nose to anything but meaty snacks. Humans love gummy bears. Well, most of us do. But when it comes to referrals ‘sweetening the pot’ by offering incentives is usually ineffective. Would you refer a friend or family member to a business for a ten-dollar gift card? By leading with a monetary reward for referring your service to others it cheapens the deal. Sometimes being sweet doesn’t pay off.

Perhaps a phenomenon, kitty-centric material is all over the internet. More than any other furry critter online. I believe it is their unpredictable and mysterious behavior that intrigues people. They have very high shareability and for good reason. They are just so darn cute. Referrals might not be adorable, but they are shared all the time. That is their very nature. People love to talk about interesting things, so in this case, be more like a cat. Inspire your customers to talk about you with surprises.

So there you have it – paying attention to the subtleties of cats might, in a way, lead to more referrals for your business. If you are allergic, well, I’m sorry. 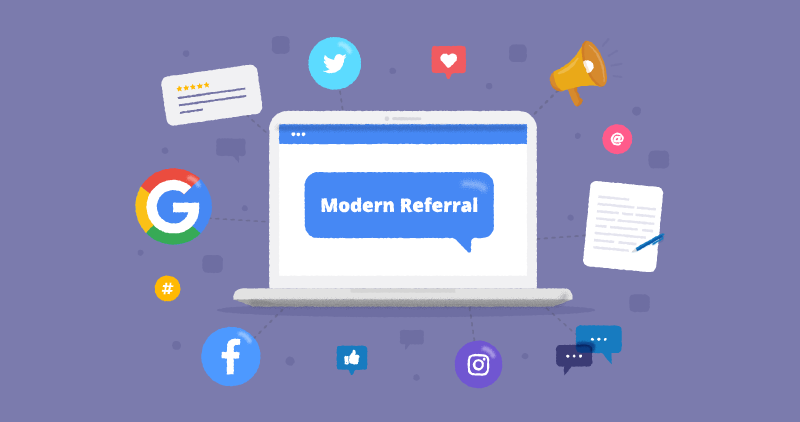 What is the Modern Referral?